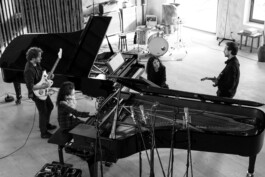 They presented their first project in 2019 at Paris Philharmonie with guest Thom Yorke followed by a tour in Lyon, London and Hamburg Elb Philharmonie. The second half of this project was dedicated to the world premiere of Thom Yorke ’s composition « don’t fear the light » and a new song « gawpers ». Those pieces were Yorke’s first composition for Katia & Marielle and classical concerts halls .